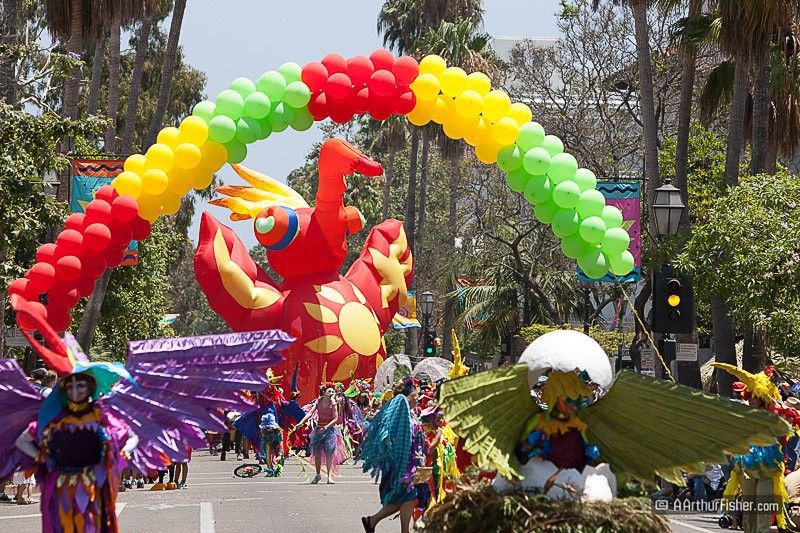 "There are very few times in your life when you can be the witness to that much joy for that many people."

When the sun rises on Summer Solstice Saturday, the city glows like a child on her birthday.

While many things define that daybreak—the delicious expectation whirring through the street, the breakfast mimosas—one thing remains relatively unspoken, yet appreciated by all: the cloud cover. While Santa Barbarians reserve the right to bemoan our marine layer 364 other days of the year, on Solstice morning, it acts like a blessed conspiracy sent to prevent the city from getting sunburned before noon; often on patches of skin that, save for this one event, never see the light of day.

After all, Solstice means skin. Even for those who choose to express themselves in jeans and a T-shirt, a sense of wildness permeates the day, and our parade is an ode to that freedom.

As the cloud cover parts, a cacophony of colors spill out: luscious red, sparkling gold, and of course, plaid with purple polka dots. The brighter the colors, the closer that connection to “something higher”: or as Michael Andrews puts it, “the zenith with the sun.”

As the sea of moving figures surges up toward Micheltorena Street—the lines of separation blurring as even the colors melt into a puddle of sweat, glitter, and cracked body paint—the city experiences the pinnacle of summer: according to Andrews, the kind of festival "where everyone finds their most authentic self.” And occasionally, a new friend. And more often than not, the glow of having created something ephemerally beautiful; bizarre and profound, with a strange sense that the laws of physics may not apply.

During the Solstice parade, anything goes: because inside it, we are infinite.

For image licensing information, please contact A. Arthur Fisher. This website is not affiliated with the Summer Solstice Celebration non-profit organization.